Liquids pipelines:
In a typical oil field, a number of small gathering lines lead from each well to central gathering facilities called oil batteries. Larger feeder pipelines, which are operated by oil producers, transport the crude oil to nearby terminals. The largest lines – transmission pipelines – transport crude oil and other liquids across the country.

Arriving at the terminal
Customers operate strategically placed terminals across client field to gather and store oil before it enters the main transmission lines. Think of these terminals as being similar to the large interchanges on the Transmission highway where many smaller roads converge. These sophisticated terminals are operated 24/7/365 by people who are specialized in the safe handling and shipping of oil.

Natural gas pipelines:
In a typical natural gas field, a number of small gathering lines lead from each well to gas processing facilities. 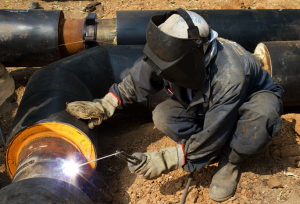 Processing the natural gas
At the gas processing facility, natural gas liquids (NGLs) like ethane, propane and butane, are separated from the natural gas, then transported via liquid pipelines to oil refineries for processing. Because natural gas is odourless, a product called methanethiol is added to the remaining natural gas to make it smell like rotten eggs, making it easy for people to detect gas leaks.

Pumping through the transmission lines
Once it’s processed, natural gas pipeline operators ship the natural gas through large transmission pipelines to the people who need it. Compressor stations are located along the pipeline route every 65 to 160 km. Large compressors, similar to jet engines (with up to 36,000 horsepower), move natural gas through the pipeline at around 40 km an hour. Sophisticated sensors along the pipeline route collect information like temperature, flow speed and pressure. The information is monitored in real-time from the control room, often via satellite or fibre optic feeds.

Monitoring from the control room
Whether they operate liquids or natural gas pipelines – has a master control room where all their pipeline operations are monitored. Every pumping station, every remote sensor, every maintenance operation, every patrol on the ground and in the air is monitored in the control room using a SCADA system (Supervisory Control and Data Acquisition), similar to those used to monitor airports and space stations. Any changes in regular operation are quickly detected here.

Watching all the time
In addition to remote sensors, JULINAT patrol the line doing regular maintenance and keeping a careful eye on the pipeline right-of-way. Video surveillance cameras, fitted with hydrocarbon sensors (hydrocarbons give off a unique infrared signature) are also being used as well as temperature sensors to detect leaks.

All equipment along a pipeline is carefully inspected and maintained – both inside and out. For example, the inside of a pipeline is inspected regularly using pipeline inspection gauges, also known as smart pigs. They are highly sophisticated machines equipped with GPS tracking and sensors. These smart pigs travel inside the pipe to identify and locate anything out of the ordinary, like minute cracks or corrosion. The tool is placed into the launcher or launching station, it is then driven by the flow of the product, pushing the pig along down the line until it reaches the receiving station.